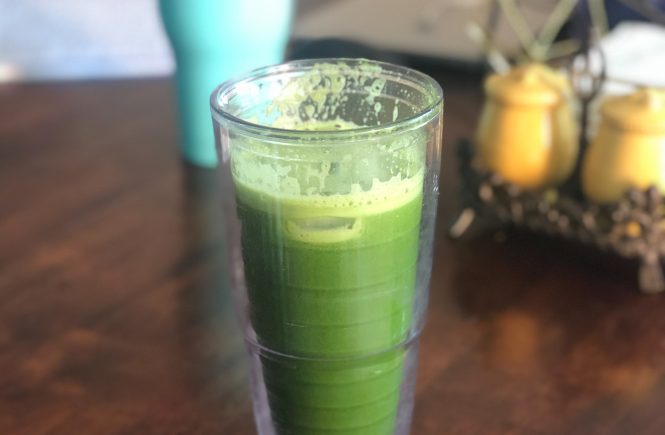 A friend in California introduced me to the Nekter juice bar when I worked at Ozobot, whose office was a mere 3 minutes away from the closest Nekter location. I tried their Toxin Flush once and fell in love with how healthy I felt for drinking green juice, and especially for actually loving the flavor (particularly of the parsley and ginger)!

However, ain’t nobody got bank for that $5 juice every day! (Or at least, I don’t.) That’s worse than a Starbucks habit I didn’t even have in the first place.

So, I asked for a juicer the Christmas before we moved into the RV but then didn’t have space (or most of the time, electricity) for it in the RV. It’s been in the boxes we shipped via Greyhound stored in Reid’s parents’ attic for a year and a half, so I was super excited to break it back out today!

When I used it in CA, I found this YouTube video recipe that tasted pretty much exactly like Nekter’s, so I decided to find and follow it again, with the addition of celery since celery cleanses are supposedly a hot thing now.

Just put the ingredients below into the juicer in the order listed, with the exception of the apple — for that, cut around the core, then add the smallest piece first before proceeding to alternate apple after other less-juicy ingredients to help move everything through your juicer.

Makes 1 juice (I actually made too much for mine this morning to where it couldn’t all fit in the glass I’d originally placed and had to dump everything into the bigger Tervis partway through, so the below are my updated amounts to use moving forward!)

Et voila! I like to add a few ice cubes then stir before drinking, as I prefer it colder to be more refreshing, but you do you.

And, I won’t make this every morning, because, come on, this is me we’re talking about. I don’t do anything every single day without fail, so that’s even more savings per week!

P.S. — I thought about making a big batch of juice all at once to enjoy as already meal-prepped the rest of the week, but my friend told me that juice starts to lose nutrients at about 30 minutes after juicing, so do with that insight what you will. I don’t care enough to research it extensively.

P.P.S — As I was humming “Colors of the Wind” from Pocahontas on the toilet around lunchtime, Reid texted me, “I think you know the colors of the wind…”

I texted back, “This Toxin Flush juice is no joke,” to which he said, “Actually it is… toxins aren’t a thing. That’s an internet lie.”

Well… tell that to my three poops for today, Reid.

This is me - wife to Reid, dog mom to Lincoln, aspiring author of fiction novels, procrastinator extraordinaire, and eternal dreamer & empath. Stick around if you'd like to join me on my journey to find fulfillment through finally finishing a project I start!

Hard to get a picture with the lighting reflecting

take a peek into my latest-and-greatest #personald

Combined our guac and pico recipes to make this am

Reid just informed me that my catchphrase is walki

Some days, I make homemade banana bread and roast

Practicing with the classic #pastpresentfuture #ta